Let’s Stop Pretending Everything is Going to be OK

Since the news broke about the EU Referendum, things have started to concern me a little. Not only the serious racial issues that people are now experiencing while going about their daily lives, this goes without saying about how bad this has become. What I’m talking about here is the part of the world that many people choose to ignore as it gets a little bit complex and confusing for most so they just sit back and hope that everything will work out. The reality though is that things aren’t looking too good.

This impacts every single person living in the UK currently both now and in the future. What am I talking about? The financial markets. Virtually everything you do on a daily basis is impacted one way or another by how the financial markets are performing.

Britain currently imports 40% of the food that is consumed annually which in turn accounts for around 7% of the GDP and employs over 3.7 million people. So why is this important? Well, because that means that when the financial markets change, specifically currency exchanges between the Pound and the Euro, then this impacts the price of 40% of the items in your shopping basket every week, either positively or negatively.

Looking long term for some and shorter term for others, moving on to pensions. Most pensions are based on the stock market in one way or another. The whole concept of a pension is designed to encourage saving for later life to benefit from compound interest growth, which means that your money is then invested in things like the stock market, property land and other areas. All designed to turn your £1 into £1.20 over a period of time, then £1.20 into £1.50 and so on, hence giving you a nice pension by the time you retire. Which for some may be many moons away whereas for others this time is approaching rather quickly. So why does this matter? Well, just as with the shopping basket example before, the value of your pension fluctuates based on how well the stock market is performing. Ultimately meaning that when you come to draw your pension, you could end up with more or less money than you planned which impacts you for many years to come and the lifestyle you have. If you were planning on having a couple of holidays per year, maybe it is that you can only afford to pay for one. Or for those not so well off, it could be the difference between using your retirement money to fund a grandchild through University or not.

So how exactly have the stock markets been doing since Brexit? Well, not so good. You can watch any news channel on a daily basis and they will often report on the short sighted day to day activities to blind people with facts and figures. You’ll hear things like “The stock market has recovered” and “The FTSE 100 closes above pre-Brexit levels” and so on. All very positive stories which sound great on the face of things. But let’s look at the finer details.

The FTSE 100 is compromised of the 100 largest companies in the UK. Which when you look at the value of the FTSE 100 it is currently around the 6,360 mark. Which doesn’t really mean anything to anyone other than those working in financial services. To put this into perspective, as of May 2016, the total value of the shares within these companies equated to around £1,604,668,000,000, that’s right, £1.6 trillion, according to this report [PDF]. When comparing this date to the graphs below, as a rough calculation, that means that every 1 point on the FTSE 100 is worth around £258,871,419. So when the FTSE drops by 1 point this is actually quite a big deal as that is money that has essentially disappeared. Now the reality is that the stock market fluctuates naturally on a day to day basis and with any significant news the stock market is also impacted. I’m not going to go into the finer details about stocks and shares, read a few books about this if you’re interested. What is important though is the volatility of the market, sharp ups and downs. This is bad. It shows a lack of confidence which often manifests itself in the day to day lives of everyone as companies delay investments, delay recruiting staff and may hold off that pay rise till next year.

So how did the FTSE 100 perform since Brexit? Well, quite volatile actually. Not a good situation. 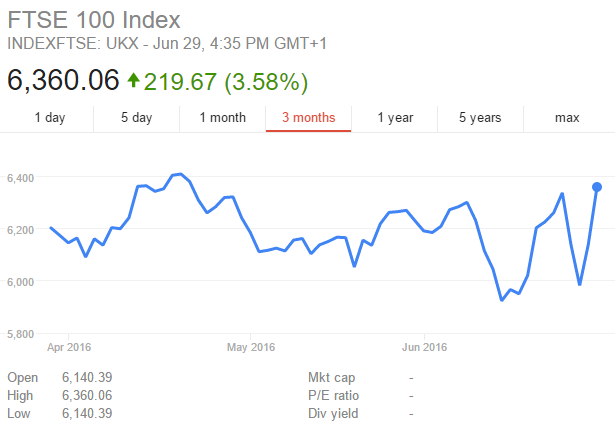 Moving on to the FTSE 250 market though, this is where things get really interesting. According to the data from May 2016 [PDF], the FTSE 250 companies which were around the 17,000 points mark worked out at a total market capitalisation value of £335,252,000,000 which equates to around £19,720,705 per point. So how have these been performing? Well, quite abysmally actually; 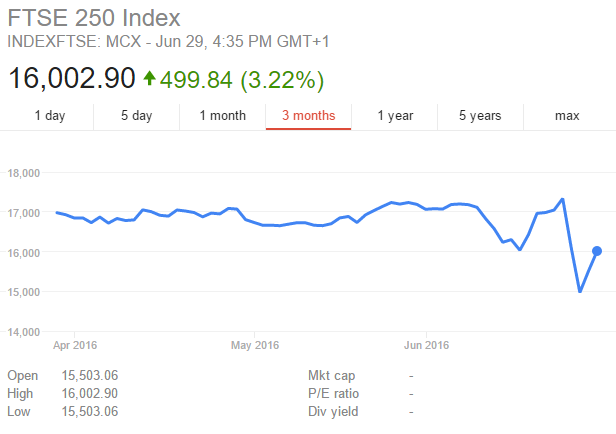 The value of FTSE 250 shares have literally fallen off a cliff. This is a lot of money that has just disappeared which means that if your pension happens to have investments in the FTSE 250, which it probably does, then if you’re coming to draw your pension now, then you’ve likely lost quite a bit of money virtually overnight. All from a single X in a box that people have made.

Moving away from stocks and shares though, let’s look at currency exchanges. In the UK we import far more goods and services than we export, which means that for everyone, when the pound falls in value, then the costs of everything automatically goes up. A new TV which would have cost you £300 now costs you £320. A new car may now cost you £15,000 instead of £14,000. And so on. 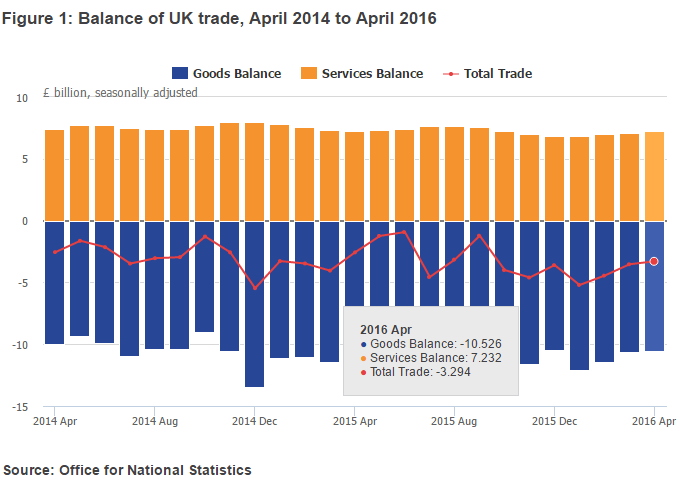 The data above from the ONS highlights how we buy more than we sell, so on average, over 50% of items you purchase are impacted when the currency markets fluctuate.

So how has the Pound been performing against the Euro since Brexit? It may not surprise you, but this again is for pretty dire reading; 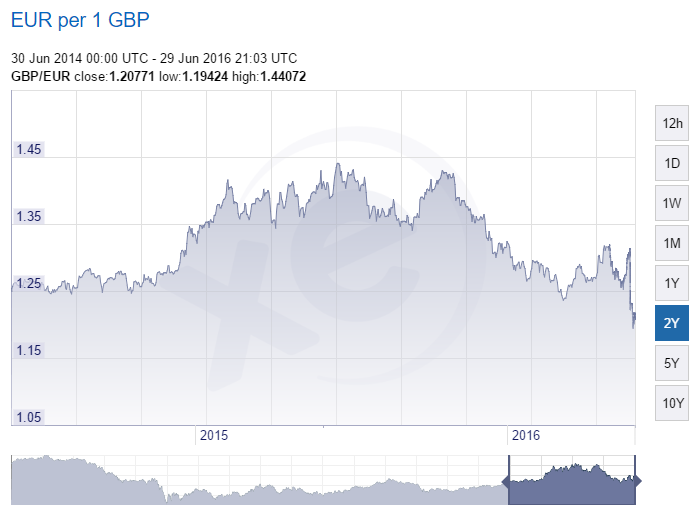 It has literally dropped off a cliff; 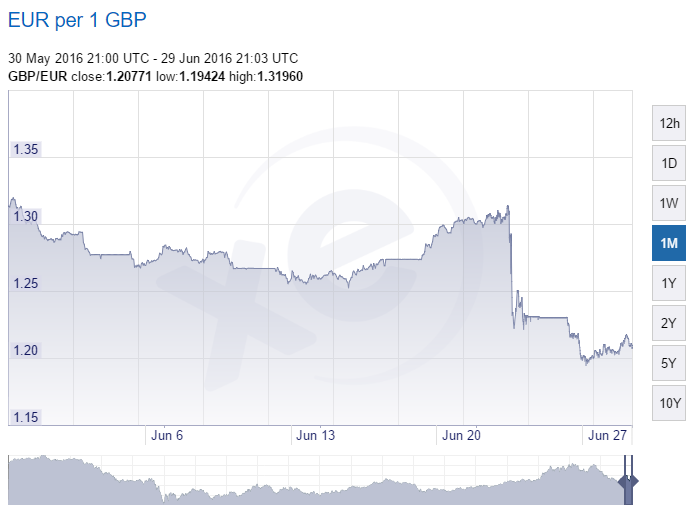 In simple terms, that beer you want on your holiday, which would have been £2 now costs £2.20 and so on.

Don’t get me wrong, a positive attitude is extremely important. But let’s not fool ourselves. Don’t see reality through rose tinted glasses which you have decided to put on. Take an objective look at what is actually happening and how this impacts you and your family. Most importantly, get involved with the debate that is happening.

I am not a financial adviser nor do I proclaim to be any kind of expert in the field of financial services. I’m sure those who work in this field on a daily basis will no doubt have a word or two to say about my rather layperson outlines above, so feel free to chip and share your 2p’s worth before it turns into 1p’s worth.